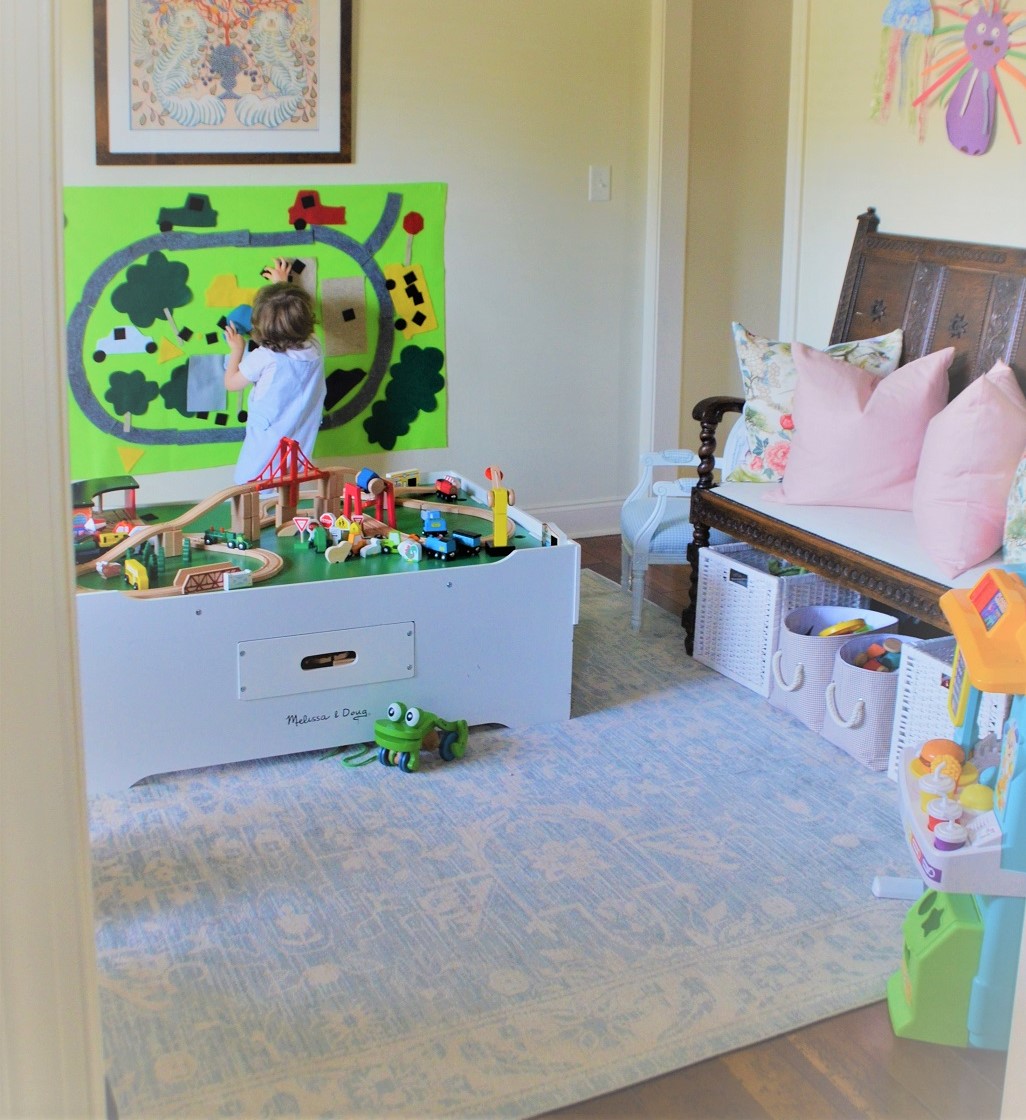 Editor’s Note: This post is sponsored as I was sent several complimentary items featured and all are marked as “c/o” throughout the post. All editorial and opinions are my own.

This spring, I’ve found myself slowly embracing the new role of being a teacher to my toddler since his school has closed due to the pandemic. It’s something I honestly never envisioned but it’s bringing us both a lot of joy. While my heart does break when W asks during our nightly prayers if he can “please go to school tomorrow” to see his friends and teachers, I’m also grateful that we’re able to use this time together to bond even more as a family and soak up every minute of every day with my favorite mini-human. I thought I’d share a few of the new activities and toys we’ve discovered that have made life a little sweeter.

W’s imagination has really taken off over the last few months and he is always wanting to play pretend with us so I was excited when I discovered the concept of felt walls. Felt sticks to felt so kids can easily move pieces around, basically like removable stickers. Our little one is all about stickers right now so that’s how I introduced the felt concept to him. He has had so much fun playing make-believe with his new race car wall. He loves to create new scenes and then take them down and start all over again. We’re trying to implement this as our afternoon “quiet play” activity and so far, so good. I also love that the felt wall sticks easily to walls with removable sticky strips so there are no nail holes and it’s easy to move the felt wall if you need to.

I rarely did crafts at home with W prior to quarantine mostly because he did so many at preschool and our kitchen was already overflowing with his adorable artwork from school. But now that he’s home, I still wanted him to get a dose of creativity in his routine so after breakfast a few days a week, I let W look through my Pinterest boards that I’ve devoted to toddler crafts and he gets to choose one or two to make for the day. This has been really fun but it’s also turned our kitchen table into a disaster zone of crayons, markers, pencils, scissors and glue sticks everywhere. I wanted to organize them so they were easy to find for W but in a beautiful and fun way. And this cute crayon holder does just that. I especially love that W sees it as a game to sort the crayons and markers by color to put them in their respective cups. Storybook Worm offers the holder in two different sizes – a six tin and an eight tin holder. I opted for the eight because I wanted to also be able to store scissors and glue and other supplies.

W is way into cars and trucks right now. He loves watching the garbage truck make its rounds in our neighborhood and he’ll run through the house making police and fire truck siren sounds. So when I saw this adorable collection of hand-cut felt vehicles, I knew W would be excited to play with them. Each piece is felt and sticks to felt or flannel so they can be a great addition to a felt wall or a child can just play with them on their own. W has done both and he loves them to bits. When I first gave them to him, he began by lining them up and “introducing” them to Hymel, his stuffed hippo. And then he “drove” them all over the living room with all the proper siren sounds. 🙂 Check out this Etsy shop for many other fun collections of felt pieces. I love the attention to detail on these so much that I went back and ordered another collection for W and am already eyeing another that we will probably order soon.

Our bedtime routine for W is pretty consistent and while I’m comfortable with it, I wanted to find something to help motivate W with his nightly “to do” list and lessen the prompting from us. So far, he really enjoys getting to move each felt piece from the “to-do” side to the “done” side. And I just have to say how adorable each hand-cut felt piece is – so cute! I also love that you can even ask for custom tasks (I asked for a “pray” piece for ours) to be made for your custom board.

Our little guy loves practicing his numbers and singing the alphabet so I had been looking for some fun activities to introduce to him that would up the ante. And these adorable acrylic dry erase boards do just that. At W’s age, tracing is a challenge but he loves getting the dry erase markers out and trying to write his name or trace the numbers and letters. That enthusiasm for learning is what I’m looking to nurture and I love that he’ll be able to use these boards over and over to help him learn to write. I’m also pleased that since the boards are reusable, we’re wasting a little less paper. We’ve been enjoying the dry erase number board, dry erase ABCs and the dry erase personalized name board (all c/o).

As a child, I loved memory-style games so I thought I’d see if W shares that same appreciation. He absolutely adores animals so I thought this cute wooden game would be perfect. Not only is it a fun and interactive activity for us as a family but I like that it can also help to encourage concentration and focus. So far, we’ve all really enjoyed it and W is pretty good at it.

I had been looking into the concept of sensory bins for awhile but wasn’t sure what toys or items would be good to include and what sort of bin to order so I turned to Etsy and found these fun pre-made sensory bins that I knew W would love. He’s obsessed with sea animals and dinos so I went with the ocean sensory bin and the dinosaur sensory bin (both c/o). The bins do include water beads but I was too worried our little guy might pop one in his mouth so we ended up leaving those out and just filled the bins with fresh water and W has had a ball playing with them. He can easily play with the bins for 1-2 hours, scooping and pouring the water and playing make-believe with the animals. Both bins have lids so they make for easy storage and I love the size of them – just right for toddlers.

Custom Dyed Name Puzzle with Dinosaurs (c/o) Made to Cut

W is really into learning the letters in people’s names, especially his own. He will take the alphabet letter magnets on our fridge and line them up in the way he thinks names are spelled, and, I may be biased, haha, but I think he’s pretty good at it for such a little guy. To help him learn to spell his own name, I thought this super cute custom name puzzle would do the trick and be really fun at the same time. He’s been in a dinosaur phase so I chose the board with dino cutouts at the bottom and he was so excited to see the dinos next to his name. He’s been playing with the puzzle routinely and he will take out each letter, say it out loud, and line them all up before replacing them. I also love that these made-to-order puzzles are made from sustainable birch wood and that the letters and shapes are stained with furniture-grade, non-toxic dyes.

Looking for more ideas? Here are a few other activities we’ve picked up or made habits since school was canceled:

Crafts. We’ve started creating a craft together most days post-breakfast. It started organically with us just making a paper lion together one day but he started asking pretty regularly after breakfast if we could make a craft. Sometimes he comes up with his own ideas but other times, I’ll look on Pinterest for inspiration and he’ll help choose something. There are so many fun and easy crafts to do with toddlers that require minimal supplies. We often just use a paper plate, construction paper, markers and glue.

Scissors. We ordered a pair of safe toddler scissors and an activity pad because I thought it would be fun and help him to learn a skill, as well. It’s turned out to be one of his favorite things and we’re going to have to order another activity pad soon because the first one is almost done.

Numbers. I try to remember to spend a few minutes each day practicing numbers with W. He’s able to go up to 50 with a little help and our goal for the summer is at least 100. It helps when he has a visual so I’ll often just write the numbers out and have him count as I write or point to them. We’ve also started to try and introduce basic math concepts like addition and subtraction by using visuals.

Letters. W knows his alphabet so we try to emphasize the sounds that letters make as well as what words begin with which letters. He loves to try and guess how words are spelled so we play with that, as well, with letter magnets on the fridge. And when we read books together, I put my finger beneath each word so he can connect the visual word with the spoken word.

Painting. W loves to finger paint on his easel and he’s started to enjoy using a paintbrush, too. Markers and crayons are always on our table (as shown above) so mixed media is a common result.

Photography and styling by Sarah Darcy of Classic Bride blog.

You may also enjoy: